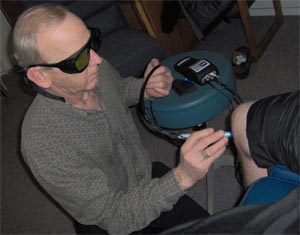 The title must have awakened curiousness of every supporter of non-invasive laser therapy, or at least a bit of amusement. Since the very first small steps on the long and manifold path of laser medicine we have been aware that despite dynamic development of this technique, yet there is a couple of firm reference points. Laser will always mean radiation of light with perfect coherence and monochromaticity. We will never direct a laser in the eye and we will always mind also other contra-indications. Lasers in class IIIa and IIIb are intended for applications in terms of non-invasive laser therapy (LLLT), whilst class IV lasers are meant for use in surgical specialties ... Or perhaps, maybe it is not quite so?

Output power is one of the most important parameters of a laser, indirectly affecting also the spectrum of possible applications as well as time required to perform therapy. Years back, low level laser therapy (LLLT) manufacturers had provided devices fitting into class IIIa, often with output power not exceeding 3 or 5 mW, especially HeNe sources which were mainly used for superficial conditions, such as wound healing. Expansion of application spectrum of LLLT into pain management and therapy of locomotive apparatus clearly pointed to the need of higher output levels and, similarly, led to implementation of other wavelengths with deeper penetration in tissue (IR). Nowadays, therapists usually work with infrared laser probes with 300 and more milliwatt of power, and values of 450 - 500 mW represent an imaginary boundary for both manufacturers and therapists, behind which laser devices are classified in laser class IV, with all consequences in terms of hygienic rules and labour safety applicable. There is no need to remark that hand in hand with increasing output of non-invasive lasers, as well as due to long-term clinical experience, higher and higher dosages of energy are also being administered.

Arndt-Schultz Law stipulates that effect of therapeutic laser appears when a certain threshold limit of irradiated energy is exceeded, and is rising till a level called plateau of effect is reached. As soon as the plateau is reached, further increasing of energy dosage has allegedly no influence on desired result of therapy. On the contrary, from a certain level on (literature indicates ca 16 J/cm2) the effect of laser is purportedly decreasing. However, in my opinion this applies only (though not quite unequivocally) to in-vitro experiments with cellular cultures, not taking into consideration (as it is practically impossible) the whole complex of effects of laser on living organism within the frameworks of therapy of a defined syndrome or complaint, comprising systematic effect, analgesic and antalgic effect, antiphlogistic and vasodilatation effect, biostimulation etc. Vice versa, in clinical practice it is obviously necessary to declare that the higher dosage of energy is irradiated, the better therapeutic effect is achieved. Furthermore, in case of deep seated applications we must take into account substantial loss of energy in the course of penetration of laser beam through tissue structures (skin, subcutaneous fat, muscles, sinew, bone). That is why we have been meeting with significant increase of recommended dosages of energy in treating deeply located conditions. However, this is only a nominal increase; in fact the real irradiated dosage of energy into the target structure is lower just due to high absorption in tissue. Herat a certain sufficient real amount of energy in the target area must be accomplished, which is unfortunately something that can hardly be achieved working with lasers with too low output power. Apart from that we have to note that higher output of our device equals shorter therapy time, which is in terms of laser therapy more than a substantive factor. Practical experience of our clinic, which has been working as a supervisory and consultatory workplace for almost the whole of the country, allows us to state that preponderance of clinical fiascos of LLLT is caused by underdose.

Lack of power is something that surgical high power lasers surely do not suffer from. In fact, any class IV surgical laser can be used for therapeutic irradiation. Thus we are well familiar with Nd:YAG laser inducing analgesic effects prior to a preparation in dentistry, or in treatment of arthritis in rheumatology. Argon and KTP lasers are routinely used for teeth whitening, though they have also been tested in dermatological applications, such as treatment of psoriasis. Ruby laser had been used by Endre Mester as the first laser for biostimulation and wound healing, furthermore proving to be useful in healing up bed sores, varicose ulcers and shingles. Excimer and Alexandrite lasers are capable of treating some superficial dermatologic conditions, whilst high power diode lasers can manage treatment of painful joint ailments. The advantage of all those lasers is their ability to irradiate high dosages of energy on large areas. However, it is necessary to defocus the beam or to scan it over the skin so that concentration of high dosages of energy to a little spot, leading to thermal damage of tissue, be eliminated. On the other hand, high price of those lasers is a serious disadvantage, almost disqualifying them economically for the use in laser therapy, because comparable results can be obtained with lasers the price of which is roughly 10 to 50 times lower.

Our clinic had also been using a CO2 surgical laser which was used in co-operation with a dermatologist and a surgeon to handle various minor excisions of superficial skin efflorescences. In several patients we had also tried the effect of therapeutic irradiation in short application times and from a distance. Those patients were suffering from torpid, long lasting therapeutic interventions not affected by pain in joints (especially with decompensated arthrosis) or sinews (epicondyllopathy). We were able to irradiate values of hundreds of J/cm2 in time equal to 5 - 10 seconds. Majority of patients treated in this way noticed significant subjective relief after this therapy.

Recently we have had an opportunity to test a very interesting therapeutic laser working with an output up to 4 Watts at the end of the probe. This is a parameter classifying the device positively in class IV, with all the conditions of operation resulting from that. Two semiconductor diodes, each with 2 W output, working in 980 nm and 810 nm wavelengths respectively, are the source of laser radiation. The manufacturer rationalizes the use of the two wavelengths claiming that 810 nm penetrates as much as into 8 cm depth in the tissue, whilst 980 nm wavelength is being caught mainly in superficial layers of skin, thus inducing desired chain of reflexive changes. Simultaneous application of both the wavelengths in therapy thus contributes to optimizing therapeutic effect.

The laser can work in different frequency modes, and it is also possible to set output power of the probe individually for every patient (in 1 mW increments within the range of 0 - 4.0 W). It is possible to use two different frequency modes, either modulated or in pulses, the former being intended for treating deeply seated pathological and painful conditions, the latter used mainly for analgesic purposes. Combination of various frequency modes is recommended, as well as combination of short point treatments of the most painful spots with area irradiation of the whole of the treated site with total irradiated amount of energy in the order of hundreds of J/cm2.

The 980 nm wavelength induces a sense of warmness in treated patients; therefore it is useful to carry out a simple "heat test" of patient's toleration. Patients should feel warmth after about seven seconds of application of continuous beam, in this case an ideal output power for a patient is set. In the course of initial application we never continue in therapy in the event that the patient denotes subjective unpleasant feelings. With regard to explicit thermal effect of this therapy, practically always after irradiation a light erythema appears on treated part of the body. No side effects of the therapy have been noticed.

Therapy with a powerful laser with 4 W output and in special short-term CW and frequency modes appears to be an interesting way to further development of LLLT in pain management. A sophisticated device, utilizing a combination of two IR wavelengths can prove its advantages in clinical use, especially in treating patients where "classical" non-invasive lasers do not achieve much clinical success. The price, which is substantially higher than ordinary price of therapeutic lasers, although obviously not reaching the amounts common for surgical lasers, may present a certain obstacle in major expansion. Some applicants may also be discouraged by the necessity to observe hygienic rules which are stricter for class IV lasers when compared with rules for the use of common class IIIb therapeutic lasers.