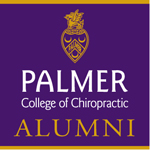 The trend in laser therapy for the past 10 years has been to increase power density and dose, since this has been shown to improve therapeutic outcomes considerably.1 The first therapeutic laser in the U.S. was cleared by the FDA in 2002, and had an output of 5 mW of power.2 Now, only four years later, several manufacturers have entered the marketplace and the power of FDA-cleared therapeutic lasers can range up to 7,500 mW.3 That represents an increase in power of 150,000 percent (Figure 1).

Despite more than 35 years of experience with therapeutic laser devices, concerns remain as to the effectiveness of laser therapy as a treatment modality.

Controlled clinical studies have demonstrated that while laser therapy is effective for some specific applications, the most common reason for poor clinical outcomes is related to low power or dosage.1 The expansion of the health care providers armamentarium to include laser therapy for pain management, inflammatory reduction and accelerated healing has "pointed to the need for higher output levels and, similarly, led to implementation of higher wavelengths with deeper penetration in tissue."4

A great deal of misunderstanding exists among practitioners relating to the selection of a therapeutic laser device that will provide the deepest penetration and greatest amount of stimulation for conditions routinely seen in practice.

Given the parallels of X-ray and infrared (laser) physics, both of which are continuums of energy within the electromagnetic spectrum, it is a wonder why many practitioners remain confused about the three important parameters of therapeutic laser devices; power, wavelength and power density. Although these are not the only parameters, they are outlined in this article because of their frequent association in the literature, due to their influence on clinical outcomes.

Cells and tissues that are ischemic and poorly perfused as a result of inflammation, edema and injury have been shown to have a significantly higher response to laser therapy irradiation than normal healthy structures.5

Tina Karu, PhD, of the Laser Technology Center in Russia and affiliated with the University of California at Berkley, has researched the effects of light on the cell since the 1980s. She found there are photoreceptors at the molecular level that, when triggered, activate a number of biological reactions such as DNA/RNA synthesis, increased cAMP levels, protein and collagen synthesis, and cellular proliferation. The result is rapid regeneration, normalization and healing of damaged cellular tissue. Thus, light is a trigger for the rearrangement of cellular metabolism.6

Bjordal places the range of laser energy absorption (joules) by the skin and subcutaneous tissue to be in the range of 50 percent to 90 percent.7 The amount of laser energy absorption increases as the wavelength decreases (Figure 2); therefore making higher wavelengths preferable for deeper stimulation of the physiological processes necessary for decreases in pain, inflammatory reduction and accelerated tissue healing. 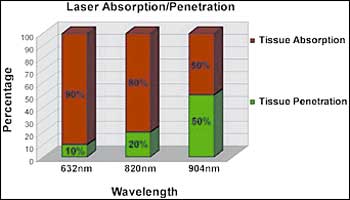 Tun'er and Hode state: "There is no point in increasing the dose if the wavelength has a low penetration factor; the penetration of the particular wavelength must be taken into account."1 The laws of laser physics have demonstrated that the higher the wavelength, the deeper the penetration. Penetration is paramount in order to stimulate deep musculoskeletal, vascular, lymphatic and neurological structures.

Given the in-depth nature of X-ray physics and utilization as taught in most school curriculums, we can draw several parallels to further our understanding of laser physics. The mAs setting governs the quantity of X-ray photons produced during a given period of time. This is also referred to as the dose. Therapeutic lasers deliver their dose by the amount of photons emitted secondary to the milliWatt setting over a given period of time. The higher the setting in both instances, the higher the dose.

The most common musculoskeletal conditions that initiate a health care provider's intervention are neck pain and low-back pain. Leading researchers published in the world's most respected peer-reviewed journals have identified the most common generators of pain in the cervical and lumbar regions. Bogduk et al. have reported that the zygapophyseal joints of the neck were implicated most frequently in acute (traumatic) and chronic neck-pain conditions.8-11

Several authors have reported the most common tissue of pain origin in the low back to be the outer layer of the annulus fibrosis and PLL.12,13

Given that the depth of these documented structures lies below multiple layers of muscle and fascia in the aforementioned spinal regions, successful clinical outcomes in chiropractic dictate that a therapeutic laser device has the ability to penetrate multiple layers of biological tissue while simultaneously providing sufficient power to stimulate photoreceptors responsible for triggering positive physiological events for the reduction of pain, inflammation and accelerated tissue healing.

Class III or "low-level" lasers have a limited power output of up to 500 mW. As mentioned previously, therapeutic laser devices are now being manufactured to meet the needs of deeply seated conditions. These devices are referred to as Class IV, or "high-power" therapeutic lasers, and have been cleared for use by the FDA up to 7,500 mW.

Recently published systematic reviews of the literature have concluded that there is a lack of adequate evidence of effectiveness of Class III "low-level" laser therapy for treatment of musculoskeletal disorders,14 arthritis,15-18 and pain.19-25 Recently reviews have also concluded that low-energy laser therapy is ineffective in treating carpal tunnel syndrome.26,27 This should be of particular concern to the physical medicine and rehabilitation professions where these conditions are commonly encountered.

Tun'er and Hode have performed an analysis of a number of frequently cited studies on the effects of Class III, "low-power" laser therapy. The authors state: "In many of these studies, analysis uncovered one or more reasons for the negative findings reported, the most common being the use of extremely low doses."1

How Much is Too Much?

Manufacturers and proponents of Class III "low-level" laser devices often express concerns regarding inhibition of the healing process due to "over-stimulation" from increased treatment times or higher-powered devices. However, reports of therapeutic laser devices having an inhibitory effect on cells has only occurred on thin tissue cultures in petri dishes (in-vitro) and lacks validation in human studies (in-vivo), with the exception granted for inhibition and suppression of depolarization of C-fibers resulting in a reduction in pain. 28-33

As the interest level surrounding laser therapy continues to grow in the physical medicine and rehabilitation professions, one Class IV "high-power" manufacturer3 now includes the use of Gold Standard outcome assessment tools with its product, including an algometer34-36 to measure changes in tissue sensitivity both pre- and post-treatment, and patient questionnaires that quantitatively assess patient improvement in a variety of areas including pain, function and quality of life.

This Class IV manufacturer promotes the utilization of a core set of measures published in the journal, Spine, to validate the efficacy of laser therapy treatment.37 These outcome-assessment instruments measure the following five domains: back specific function, generic health status, pain, work disability, and patient satisfaction.37 Perhaps in the future more therapeutic laser manufacturers will follow suit and expose their technology to scrutiny of scientific rigor for the benefit of those who would choose laser therapy as an adjunct to chiropractic care.

Dr. Jan Tun'er, President of the Swedish Laser Medical Society and renowned lecturer and author on the topic, states: "I can see two alternatives for myself: to speak up and start a conflict within the laser community, maybe discrediting the therapy itself in the eyes of the general public or to keep quiet and let U.S. practitioners pay a lot of money for very low-powered lasers, leaving us with dissatisfied customers and discredit from those who are supposed to use laser therapy in medicine."1

A Look to the Future

Tun'er and Hode's position on Class IV "high-power" lasers is reported as: "For the moment, we must rely on our own clinical experience. That experience, however, is so encouraging that it cannot be ignored, even with lack of scientific support. It would appear that high-powered therapeutic lasers will be able to further expand the scope of laser therapy."1

Given that the number one reason for poor clinical outcomes is low power and poor penetration, most health care providers using low-powered devices agree with these pioneers in the field.

Reprinted November 8, 2006 with the authors permission.